Easter With My Family Gives Me Warm Fuzzies 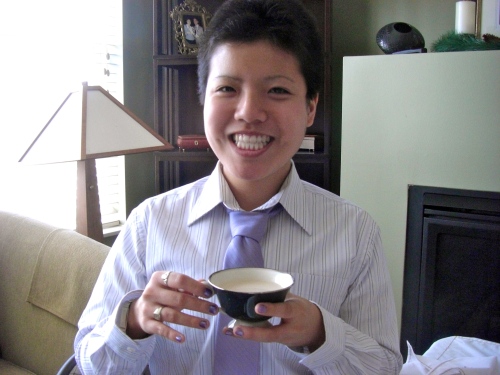 Decked out in my lavender best for Easter

Today, for the first time in five years, I spent Easter with my family. After eating brunch together, my parents, older brother, and I went to a family friend’s place to spend Easter with a number of family friends and my aunt and two younger cousins. Despite feeling slightly apprehensive about how I was going to be gendered — and even though I feel as though I’m still visiting Minnesota and going to return to Chicago any day now — it was lovely.

Everyone was wonderful. I don’t think anyone used my old name, people definitely called me “Ryan,” and the pronoun situation wasn’t really awkward (translation: other than my immediate family, who used masculine pronouns for me, I can’t specifically remember what people used, but since I don’t have cringey memories of being called “she” or “her,” I say it was a success). My nail polish was complimented, and my tie didn’t get weird looks.

The four cousins (my older brother, my two cisgirl cousins, and I) were sitting around a table while we ate, and for the first time, the gender balance seemed even: two boys, two girls. Not, of course, that there needs to be any kind of balance between people of various genders — I just felt, maybe for the first time, that I wasn’t being “one of the girls” with my cousins. It was nice.

At the same time, in a good way, nothing really changed. My cousins were there in their cute, flouncy dresses, and I was there in my shirt and tie, but no one was awkward about the fact that I’m now out as trans. My cousins and I chatted; we laughed; we hugged; we drank coffee with so much half-and-half and sugar that it was really just sweetened cream with slight undertones of coffee. Fabulous. Even though I’ve been out for months, I am still relieved beyond words that coming out as trans hasn’t damaged our relationships — I love my cousins, and I’d hate it if being trans caused problems in our family the way it does in some.

Even the little old Korean lady — a dear family friend, almost a pesudo-grandmother — was wonderful. She’s totally not phased by me being trans and told me to just keep speaking up for myself and being true to myself.

It was good for me. I’m used to feeling affirmed in my Chicago trans/genderqueer circles and mostly invisible elsewhere, and while this was very different from my friends in Chicago, it was really nice to be reminded that cispeople can also see me as who I now am, not who I once was. On Facebook, for example, I recently added a number of family members as family on my profile, and I was really nervous about how I was going to be gendered (Will they say I’m their niece or their nephew? Their female cousin or their male cousin?); so far, it’s all been fabulous. I mean, I wish the terms didn’t need to be gendered (especially the cousin one — really, Facebook!), but that they haven’t been gendering me as a girl has really been making me feel all warm and fuzzy inside.

Even though I miss Chicago (Chicago people and my life in Chicago) pretty much every hour of every day thus far, I’m beginning to acknowledge that moving back to Minnesota might, possibly, be good for me in some ways. Despite how it had begun to feel in Chicago (and it was amazing!), the world is not actually composed primarily of trans/genderqueer/gender non-conforming folks, and I suppose I do need to learn how to deal with that. I mean, I’d still prefer to be learning that in Chicago, but maybe I wouldn’t have learned it as well in Chicago, given that I could basically retreat to what amounted to de facto trans-only spaces on a regular basis.

Chicago longings aside, today went well. I spent the day with family I love, and in the end, that’s what Easter is about for me (well, that and chocolate, which is what I’ve had to make do with for the past five years). If nothing else, I’m glad I was able to finally spend Easter with my family again.

5 responses to “Easter With My Family Gives Me Warm Fuzzies”