Exactly three months from today, I’m going to have top surgery! I am so excited. After having tentatively decided on half a dozen different dates over the past month, it feels so good to finally have scheduled it. It feels like I have been waiting for so long. It’s also exactly six months to the day after my friend had his surgery, which feels like a good sign.

It is also almost exactly two years after I met Kate Bornstein (stay with me; I promise this is relevant). On November 5, 2009, I saw Kate Bornstein speak at Bryn Mawr; I had a sushi lunch with her, my fellow LGBTQ group co-head, and a grad student who was writing his dissertation on GID and the DSM (and possessed a car that could transport Kate where she needed to be); and I saw her perform at Villanova. Incidentally, Kate Bornstein also called me a gentleman — she was the first person to ever have done so. 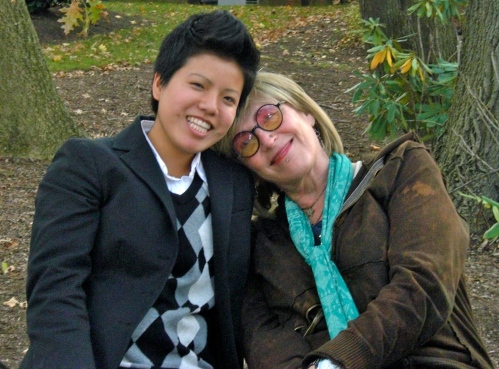 Me with the wonderful Kate Bornstein, back in November of 2009

I dressed a little more nicely than usual that day, and I made the best attempt I could at binding without an actual binder (and without resorting to duck tape or ace bandages because they’re just bad ideas). I distinctly remember walking down the path between Rock and Thomas and thinking to myself that what I was doing (trying to bind) was not sustainable, and I was going to need to find some way to make it work long-term. That stopped me in my tracks for a second, literally, and I was basically hit over the head (this time metaphorically) with the realization that I was eventually probably going to have top surgery.

Before that moment, I’m sure I’d done some research about top surgery, and thought about it, but that was the first moment when I took it as truth that it would be happening for me (even though I hadn’t exactly realized how I felt). It took me a long time to intellectualize that deep-felt knowledge, and to educate myself and reason through everything, but that was my first instinctual decision about top surgery.

I haven’t actually thought about that day in quite some time (or rather, about that particular part of that day — having lunch with Kate Bornstein was quite a highlight), but it was a sort of turning point, or perhaps more a realization of something that had been going on subconsciously. Either way, although I’ve been researching surgeons and insurance policies and whatnot for less than a year, this has been a long time coming.

Three months. It seems so far away. And yet, I’ve waited for what seems like a very long time — “seems” being a key word because I know many people have waited for much longer and still do not have surgery in their near future — I can wait for a little while longer. Three months. The countdown has already begun.