I’ve gone to Milk & Honey Cafe several times — once with my roommate when we were looking for furniture, once with my cousin when she was visiting from Indiana, and once by myself, fairly recently before I left Chicago, because I was really craving a bagel with smoked salmon and cream cheese. Milk & Honey Cafe is located on Division, less than a mile away from where my apartment was in Chicago. The food was always excellent; if I’d had more money, I would have been there far more frequently.

When I went to Milk & Honey with my cousin, she ordered the smoked salmon, and bagel. I had a taste of it, and it was delicious. So delicious, in fact, that I would find myself craving it randomly throughout the next months; I finally caved soon before leaving Chicago. I’m usually not big on red onions or capers, but they were perfect with the fatty lusciousness of the salmon and the cream cheese.

The french toast was also good. I’d read a review of it online, so I wanted to try it, even though I’d been craving the salmon. I ended up taking the French toast home. It was light, eggy, slightly orangey. Yum. 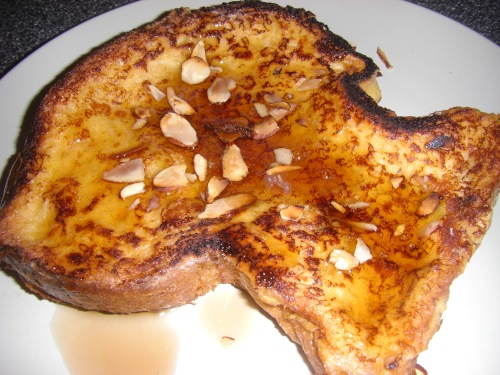 When I went with my cousin, I had a goat cheese and mushroom panini that was outstanding. It all worked really well together, and it was a very tasty kind of messy, the way a good panini is sometimes.

Milk & Honey is a great place to eat. I wish it were closer to where I live now, actually. If you’re ever in Wicker Park, you should check it out.

One response to “Milk & Honey Cafe”